Chickpea (Cicer arietinum L.) is the largest produced food legume in South Asia and the third largest produced food legume globally, after common bean (Phaseolus vulgaris L.) and field pea (Pisum sativum L.). Chickpea is grown in more than 50 countries (89.7% area in Asia, 4.3% in Africa, 2.6% in Oceania, 2.9% in Americas and 0.4% in Europe). India is the largest chickpea producing country accounting for 64% of the global chickpea production The other major chickpea producing countries include Pakistan, Turkey, Iran, Myanmar, Australia, Ethiopia, Canada, Mexico and Iraq .

Chickpea is an important source of protein for millions of people in the developing countries, particularly in South Asia, who are largely vegetarian either by choice or because of economic reasons. In addition to having high protein content (20-22%), chickpea is rich in fiber, minerals (phosphorus, calcium, magnesium, iron and zinc) and β-carotene. Its lipid fraction is high in unsaturated fatty acids. Chickpea plays a significant role in improving soil fertility by fixing the atmospheric nitrogen. 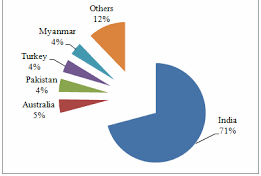 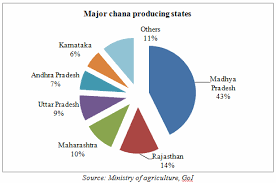 Chickpea meets 80% of its nitrogen (N) requirement from symbiotic nitrogen fixation and can fix up to 140 kg N ha-1 from air. It leaves substantial amount of residual nitrogen for subsequent crops and adds plenty of organic matter to maintain and improve soil health and fertility. Because of its deep tap root system, chickpea can withstand drought conditions by extracting water from deeper layers in the soil profile

Desi chickpea: Chickpeas with colored and thick seed coat are called desi type. The common seed colors include various shades and combinations of brown, yellow, green and black. The seeds are generally small and angular with a rough surface. The flowers are generally pink and the plants show various degrees of anthocyanin pigmen tation, although some desi types have white flowers and no anthocyanin pigmentation on the stem. The desi types account for 80-85% of chickpea area. The splits (dal) and fl our (besan) are invariably made from desi type.